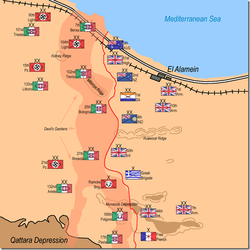 "The Alamein position was unique in the Western Desert because it had secure flanks, resting on the sea in the north and the Qattara Depression in the south" (Badsey, Stephen). "The presence and virtual impassibility of the Qattara depression, the height of the Alam Halfa Ridge, and the proximity of the sea made it unlikely that Rommel could execute one of the outflanking manoeuvres that he had made peculiarly his own" (Matanle, Ivor). "War on the rock-hard desert, where there was no cover and few landmarks to take bearings on, was more like a sea fight than anything else, which may have been one reason why the British were so good at it" (Solzberger, C.L.). "...the 37 miles of front could easily be held by both armies, which had concentrated their forces to hold the line" (Badsey, Stephen).

"...ocean on one side, and impassable depression on the other severely limited Rommel’s maneuverability"
-Mark A. Stoler

Click here to see my interview with Mark Stoler.

A Pause in the Fighting 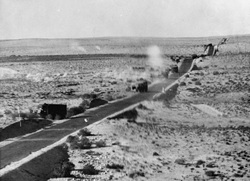 "Alexander and Montgomery...decided...to remain on the defensive until such time as they had been reinforced to a level of men and equipment they knew could and would defeat their enemy...in the early part of September, President Roosevelt's gift of 300 Sherman Tanks...began to arrive in Egypt" (Matanle, Ivor). "Montgomery restructured the 8th Army, bringing in new divisions and generals and lifting the army's morale with his bold fighting talk - declaring among other things that he would 'hit Rommel for six out of Africa'. He also improved relations between the army and the Desert Air Force, ensuring a more unified attack plan" (www.bbc.co.uk). "Montgomery [went] to the patient business of training and equipping his inexperienced troops, who he regarded as 'civilians in uniform'" (Brinkley, Douglas). "Choosing to take a defensive stance, Rommel fortified his position and placed over 500,000 mines, many of which were anti-tank types" (Hickman, Kennedy). "The Axis forces on the Alamein line had dug themselves in, and planted what they called 'Devil's Gardens' of mines and booby traps up to 5 miles deep" (Badsey, Stephen). Montgomery, having obtained copies of Rommel's battle plans, knew what his strategy was, and where his supply lines ran. "By August 1942, only 33% of what Rommel needed was getting through to him. Rommel was also acutely aware that while he was being starved of supplies, the Allies were getting vast amounts through as they still controlled the Suez and were predominant in the Mediterranean" (http://www.historylearningsite.co.uk). "Time and again in the desert, victory went to the side with the most gasoline. The war ran on gasoline, and like nearly everything else, it had to be brought from a long way off at a great cost" (Sulzberger, C.L.). "...this theater had a very low priority for Hitler; indeed, Rommel was sent in only to stop a total Italian  defeat, not launch his highly successful offensives...the British were very effective in destroying German supply convoys [as well]" (Stoler, Mark).

"All that is necessary is that each and every officer and men should enter this battle with the determination to see it through, to fight and kill, and finally to win. If we do this, there can be only one result - together, we will hit the enemy for six out of Africa." - Gen. Bernard Montgomery to his British 8th Army 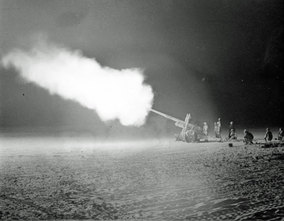 "...Montgomery planned to open the battle with a massive artillery bombardment, and then to use the infantry divisions of his XXX Corps...to make a breach in their defenses. Meanwhile sappers would 'gap' the minefields for both the infantry and the armour. Meanwhile, the the British armour of the X Corps...would sally forth from the minefields to destroy the formidable armour of Rommel's army, contained in his German 15th Panzer Division and the 21st Panzer Division, and the Italian Ariete and Littorio Divisions" (Badsey, Stephen). During this time, "...[Rommel] had in fact left the front because of poor health, and handed over command of Panzerarmee Afrika to General Georg Stumme..." (Matanle, Ivor).
"The Battle of El Alamein" (http://www.youtube.com/watch?v=LQTM6xbc96Y)
"Deception began...to take a hand in the planning of the great Battle of Alamein...Montgomery made the assumption that Rommel would...expect him to attack from the South and try to drive the Axis forces to the sea...The British plan was therefore based upon exactly the opposite procedure -- an assault from the sea-bound North..." "The massive movements of British troops northward from the southern positions had to be concealed. Montgomery's mastermind of 'Operation Bertram'...hit upon the idea of replacing every vehicle that stole away in the night with an inflatable rubber replica, realistic enough to to fool aerial reconnaissance...A fake pipeline was built and deliberately constructed slowly so that the Germans would believe the attack would be scheduled for November rather than October. False radio traffic was used...[and] camouflage assumed a new importance as the vast dumps of fuel and stores in the north were concealed..." (Matanle, Ivor). "Paths were cut through the minefields and enemy forces destroyed to tied down when they could have been better used elsewhere. The loses in the infantry were high and at times it became almost WW1 like in the fighting, but without the mud. It prepare the way for Supercharge, which should be considered an added success" (Paterson, Ian).
Click here to see original 'Operation Lightfoot' Plans.

How the Battle Played Out: 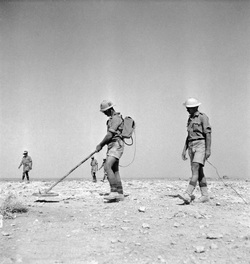