The Beginning of War in North Africa 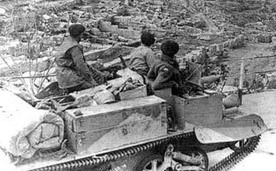 World War II in North Africa "...began in September, 1940, when a huge Italian army...invaded Egypt from Libya. There was not much fighting until December; then, in two months time, the British army...commanded by General Archibald Wavell, ran the Italians back 500 miles into Libya" (Sulzberger, C.L.). "...the British saw many changes in fortune, beginning with [the] lightning campaign of December 1940, which almost destroyed the Italians in Libya" (Badsey, Stephen). "The attack on the [Italian] coastal fortress of Tobruk was finally launched on the 21st [of January] and it fell the next day, yielding 30,000 Italian prisoners" (history.com). "When it looked as though Mussolini was about to lose everything in North Africa, Hitler reluctantly decided to send him two divisions and a first-rate general, Erwin Rommel. An early offensive campaign was not called for...He [Hitler] simply wanted Rommel to take charge in Libya, [and] stop the British..." (Sulzberger, C.L.). Rommel arrives in North Africa on February 12, 1941 and takes charge. Rommel and his army were only sent to Africa after Hitler saw the Italians could not hold their own in Africa. Africa and the middle east were essential to both the Axis, and Allied armies because of the oil that the countries of North Africa and the Middle East had. Fuel and oil was essential to the war effort, and to achieve victory. 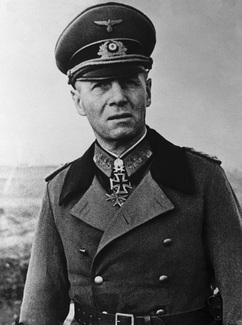 Erwin Rommel, dubbed the 'Desert Fox' by the British, "...was one of Germany’s most respected military leaders in World War Two." "Rommel was a daring leader who had embarrassed the British with his lightning attacks and had become a national hero in Germany" (Feldman, George). In addition to being commander of the Afrikakorps during the North African Campaign, he also played a significant role at D-Day, being "appointed by Hitler to be commander of the defenses of the Atlantic Wall" (Trueman, Chris). "He [Rommel] was respected...by allied forces for his tactical brilliance" (Stoler, Mark). "He as a master tactician, far better than their [the British's] own commanders achieving better results with fewer forces at times" (Paterson, Ian). One British General, Claude Auchinleck, once made this sarcastic comment about Rommel to one of his Superiors: "…(you must) dispel by all possible means the idea that Rommel represents anything other than the ordinary German general………PS, I’m not jealous of Rommel" (Auchinleck, Claude). "Rommel’s fame in the desert rests on his success as a leader and also his uncompromising belief that all prisoners of war should be well looked after and not abused" (Trueman, Chris). As you read on, you will also see his successes as a General in the North African Campaign. Rommel was also "...implicated in the July 1944 bomb plot against Hitler..." (Trueman, Chris), and later was given the choice of committing suicide by Hitler, instead of execution, and took it.

"[Rommel was] a great Field Marshal. He led the fight from the front, [and] was always with his soldiers. -Guenter Neugebauer, Afrikakorps, 15th Panzer Division
(Click here to see interview with Guenter Neugebauer.) 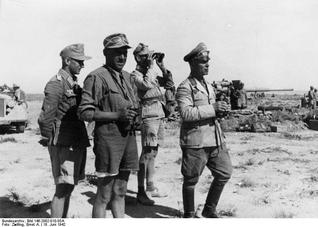 "...General Erwin Rommel...fought the British back and forth over the Libyan Desert, winning and losing and winning again until he was within 70 miles of Alexandria" (Sulzberger, C.L.). The war in North Africa was much like a see saw, one side would push the enemy back, winning again and again; then the side that was losing would rebound and fight back, pushing the other army back where it came from. These type movements occurred multiple times. "On January 21, 1942, Rommel launched his second offensive and quickly drove the British back almost 300 miles. The aggressive German commander recaptured Benghazi on January 29 and continued to push east, reaching Gazala on February 4" (Zabecki, David T.). "Then, in May, Rommel struck again. By the nineteenth of June, he was outside Tobruk. Two days later, Tobruk fell...[and] Rommel pushed on toward Egypt. But Auchinleck [leader of the British 8th Army] was fighting back with terrific determination now, and by July, near El Alamein, Rommel called for a halt 'for the time being'" (Sulzberger, C.L.). "This [had been] a Blitzkrieg in the grand manner...Rommel had pushed 375 miles back towards Egypt in defiance of his orders..." (Matanle, Ivor). "The Eighth Army, 'brave but baffled' and in desperate need of reorganization, now prepared for Rommel's next attack" (Messenger, Charles). The First Battle of El Alamein was about to begin.