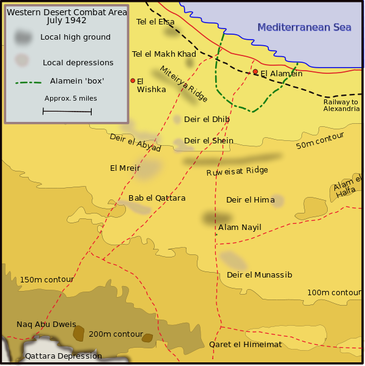 "Rommel's victorious forces, now known as the Panzerarmee Afrika, were finally halted at the First Battle of El Alamein by a 'brave but baffled' Eighth Army under General Sir Claude Auchinleck during July 1942" (Badsey, Stephan). "To hold the territory between the Mediterranean Sea and the depression, the  Eighth Army constructed three large boxes with the first and strongest centered on El Alamein on the coast. The next was situated 20 miles south at Bab el Qattara, just southwest of Ruweisat Ridge, while the third was located on the edge of the Qattara Depression at Naq Abu Dweis" (Hickman, Kennedy). "In the First Battle of El Alamein beginning on July 1st 1942, German General Erwin Rommel tried in vain to attack the allied defensive positions with his Africa Corps (and Italian allies), yielding tremendous losses to his army forces as a result. The actions...forced an end to the fighting by July 22nd" (secondworldwarhistory.com). "The First Battle of Al Alamein was a major boost to the Eighth Army's morale. Although it secured no advance, it stopped positively Rommel's push to Egypt, and proved that the Allied army could hold the Panzerarmee Afrika" (Matanle, Ivor). "Though a stalemate, Auchinleck had won an important strategic victory in halting Rommel's advance east" (Hickman, Kennedy). 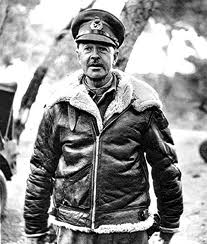 Harold Alexander
Following the First Battle of El Alamein, the British Eighth Army "...now awaited badly needed reinforcements and some more positive leadership than that provided thus far by General Auchinleck, and Lieutenant-General Ritchie[commander of the 8th Army]" (Matanle, Ivor). "On...August 4, 1942, the Prime Minister of Great Britain...Winston Churchill, had come to Cairo to see what was going wrong with the war against Rommel...he drove to the front to look things over for himself...talking to troops and sizing up their leaders (Sulzberger, C.L.).  "Churchill wanted action and a victory, mainly for political needs, which Auchinleck had not delivered. He has lost the Gazala battles which with better organisation and co-ordination could have been a British victory, but he [had] held the line at First Alamein, by fighting a very good defensive battle" (Paterson, Ian). "He [Churchill] had lost faith in Auchinleck after his defeats at Rommel’s hands" (Stoler, Mark). Churchill made the decision to replace Auchinleck, and for his replacement, "asked the Americans to accept that General [Harold] Alexander be released from his responsibilities to 'Operation Torch' [See 'Operation Torch' under 'Rommel's Retreat'] to take over [command of the] the Western Desert" (Matanle, Ivor). The Americans agreed, and Harold Alexander was now in command of the British Forces in the Western Desert and Middle East. Replacing Lt. Gen. Ritchie "For the command of the Eighth Army, Alexander and Churchill initially selected Lieutenant-General W.H.E. Gott, but he was killed in an air crash days afterwards. Their choice fell on General Bernard Law Montgomery, who had been intended as Alexander's replacement as commander of the British 1st Army for 'Torch', and was now moved to the desert..." (Mantanle, Ivor). Now "...in charge of the Eighth Army was General Montgomery" (Sulzberger, C.L.). 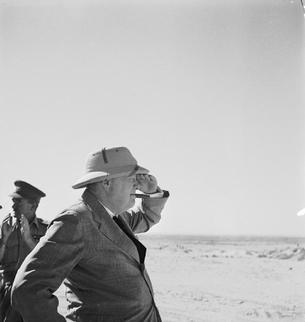 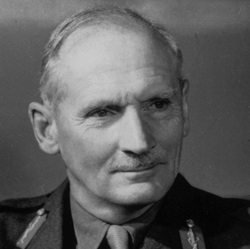 "Montgomery served in...France at the beginning of the First World War. He was seriously wounded when he was shot in the chest in October 1914 and was hospitalized in England." "On the outbreak of the Second World War Montgomery was sent the France with the British Expeditionary Force. He led the 2nd Corps but was forced to retreat to Dunkirk during Germany's Western Offensive and arrived back in England on 1st June. Montgomery was placed in command of the 5th Corps (July 1940-April 1941), the 12th Corps (April 1941-December 1941) and the South-Eastern Army (December 1941-August 1942). In July 1942...Montgomery was chosen to become commander of the Eighth Army" (www.jewishvirtuallibrary.org). Montgomery led the 8th Army through North Africa and help liberate North Africa of Axis forces. "On 10th July 1943, [Montgomery and] the 8th Army landed at five points on the south-eastern tip of the island [of Sicily]" (www.jewishvirtuallibrary.org). Montgomery continued to lead the 8th Army through Italy through the capture of Naples on October 1st, 1943. "In December 1943, Montgomery was appointed head of the 2nd Army and commander of all ground forces in the proposed invasion of Europe. Montgomery believed he was better qualified than General Dwight Eisenhower to have been given overall control of Operation Overlord" (www.jewishvirtuallibrary.org). After D-Day, Monty led the British 2nd Army in Operation Market-Garden to gain crossing of the large Dutch rivers. This was a failure. After the end of the war, "Montgomery was allowed to remain in Europe and the end of the war was appointed Commander in Chief of the British Army of Occupation. He also [later] served under General Dwight Eisenhower as deputy supreme commander of the Allied forces in Europe" (www.jewishvirtuallibrary.org). Bill and Sue Campell, who have had encounters with Montgomery, once told me that "He seems to have been a very very complex character...I think it very probable he was definitely an attention seeker, he believed in publicity and made sure he got it whenever the situation presented itself.. He certainly always seemed to be in the right place at the right time, and always knew where the press were and any visiting dignitaries, but always seemed to mention his men at some point" (Campbell, Bill).

"The men in the Allied forces respected ‘Monty’. He was described as "as quick as a ferret and about as likeable." Montgomery put a great deal of emphasis on organization and morale." -- (http://www.historylearningsite.co.uk) 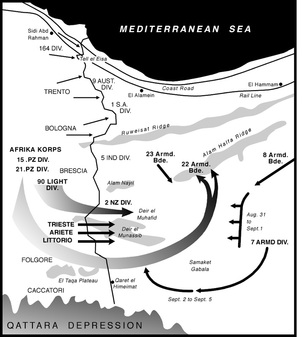 "Moving forward, Rommel attacked Montgomery's Lines at the Battle of Alam Halfa (August 30 - September 5 [1942])" (Hickman, Kennedy). "With the conclusion of the First Battle of El Alamein in July 1942, both British and Axis forces in North Africa paused to rest and refit...To defend this line, three infantry divisions from [the British] XXX Corps were positioned on ridges running from the coast south to Ruweisat Ridge. To the south of the ridge, the 2nd New Zealand Division was similarly fortified along a line ending at Alam Nayil" (Hickman, Kennedy). At each position, the divisions were backed-up by artillery support and were protected by minefields. "When attacked, these two brigades were to inflict maximum casualties before falling back. Montgomery established his main defensive line along the ridges running east from Alam Nayil, most notably Alam Halfa Ridge [hence the name of the battle]." Rommel was running low on supplies, and his attack had to be quick, and decisive. "Constrained by the terrain, Rommel planned to push the 15th and 21st Panzer Divisions, along with the 90th Light Infantry through the southern sector, while the bulk of his other forces demonstrated against the British front to the north. Once through the minefields, his men would push east before turning north to sever Montgomery's supply lines." Rommel's divisions quickly encountered difficulties. They had been spotted by the RAF and were attacked. They also directed the artillery where to fire. "Reaching the minefields, the Germans found them to be much more extensive than anticipated. Slowly working through them, they came under intense fire from the 7th Armoured Division and British aircraft which exacted a high toll...Eager to make up lost time and under constant harassing attacks from 7th Armoured, Rommel ordered his troops to turn north earlier than planned...This maneuver directed the assault against the 22nd Armoured Brigade's positions on Alam Halfa Ridge" (Hickman, Kennedy). The Germans were held back by intense British fire, and constant RAF air attacked. Rommel was forced to withdraw, after Montgomery halt further ground assaults against Rommel. "The victory at Alam Halfa cost Montgomery 1,750 killed, wounded, and missing as well as 68 tanks and 67 aircraft destroyed...Alam Halfa represented the last significant offensive launched by Rommel in North Africa" (Hickman, Kennedy).
Proudly powered by Weebly