Turning Point of the War? 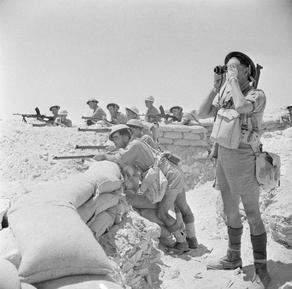 There is no doubt that the Second Battle of El Alamein was one of the pivotal points during World War II. It is known that "...the Second Battle of El Alamein turned the tide in North Africa in favor of the Allies" (Hickman, Kennedy). "The Second Battle of El Alamein was a turning point in the North African campaign. It ended the long fight for the Western Desert, and was the only great land battle won by the British and Commonwealth forces without direct American participation" (www.bbc.co.uk). The battle had such a profound effect on Second World War that Winston Churchill commented that "Before Alamein we never had a victory, after Alamein we never had a defeat" (Churchill, Winston). This is very true, in that for the rest of the North African Campaign, with aid from the US, the British never lost another major battle, and pushed the Axis forces clear out of North Africa. Guenter Neugebauer, a former soldier in the Rommel's Panzerarmee Afrika, commented that El Alamein was "The beginning of the end of the war [for the British]" (Neugebauer, Guenter). "It was a key battle to finally destroy or severely limit the fighting capacity of the DAK [German] and Italian forces, plus with the high command knowing the Op. Torch was scheduled two weeks after the start they knew that between them it would signal the end of the Axis campaign in N. Africa" (Paterson, Ian). "It proved the Axis, especially the Germans could be defeated. It gave the troops confidence that they could win and in their Commanders, especially Monty as he would not commit them to battle unless he felt they were ready and could win" (Paterson, Ian).

"It [the Second Battle of El Alamein] was the first British victory in the war and ended the threat of German control of the Suez canal.  As Churchill put it, it was not the beginning [o]f the end, but it was perhaps the end of the beginning.  Along with the successful Anglo-American landings in North Africa in early November and the huge Russian victory at Stalingrad, the three victories mark what is normally considered the turning point in the war" (Stoler, Mark).

"Also by winning [the battle] they also protected the Suez Canal and the Oil fields of the Middle East" (Paterson, Ian). Ending the threat of German control of the oil field of the middle east was essential, because as I stated before, "Time and again...victory went to the side with the most gasoline. The war ran on gasoline..." (Sulzberger, C.L.). If the Germans had won at the Second Battle of El Alamein, Rommel would have moved on to capture Alexandria, a major industrial center in Egypt, and then capture Cairo, a major port on the Nile River. They would also have captured the Suez Canal, which was a major shipping route for the Allied forces that would have severely crippled the Allied supply line. The Suez Canal was a major route for all Allied supplies and troops going into the Mediterranean and Southern Europe during the war. If the Suez Canal was captured, the war may have ended a lot differently because of the lack of supplies that would follow its capture.

This battle was also a morale booster for the British in that "it taught the British & Commonwealth forces they could win."  "It was...a morale raising victory for the long suffering British public" (Paterson, Ian). 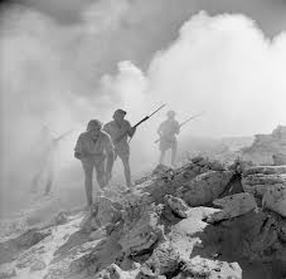 Now that the front was shifted towards Tunisia after Rommel's massive retreat back to Tunisia, and the Torch landings in the West, German policies began to "change as Hitler decided to take over and hold Tunisia (into which Rommel escaped) as well as militarily occupy what had previously been the unoccupied southern part of France" (Stoler,  Mark). Occupying  Tunisia was a last chance effort by Hitler to hold North Africa that had been caused by the enormous loss in territory after Rommel's defeat at El Alamein. The purpose of occupying Southern France by the Nazi Army was to create a buffer for if/when the Allies liberated Africa. These occupations were both caused by Rommel's shocking defeat at El Alamein, and the retreat that followed. If Rommel had not lost at El Alamein, and he had defeated the British and forced them back into the Middle East, then the pincer action that was created by the Torch Landings and Montgomery's 8th Army never would have happened. The Americans and British that would have landed during Torch would have had to push the Axis all the way out of Africa themselves, without the 8th Army, seeing as that the Axis would have occupied all the way to Egypt. That is if the Torch landings would have happened at all.

On the part of the British, this was a major turning point in their attack strategies that would benefit them throughout the remainder of the war, and in other wars to come. "It also taught the British to fight in numbers in 'set piece' battles rather than the individual unit actions of the past, as these stood more chance of success with lower loses" (Paterson, Ian).